Why on earth would anyone change jobs in autumn? 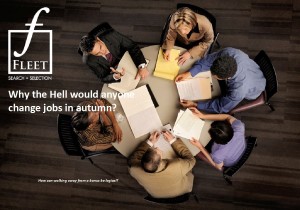 In Financial Services, many people believe that the best time to start looking for a new role is in the late spring; once budgets have been set and bonuses awarded. While the period of April to June is the peak time of year for recruitment, September to early December is also a very busy time.

In some ways, actively searching for a new role in the autumn seems foolhardy in the extreme as it would mean walking away any discretionary bonus.  Why anyone would do more than keep a vague eye on job boards when management are just beginning to think about discussing bonus awards, doesn’t seem to make any sense.  That is, of course, unless your role is making you miserable, you’re fed up working in the industry or personal circumstances dictate.  For those who are just a teensy bit bored with the routine of their job, how can walking away from a bonus be logical?  It’s no secret that bonuses aren’t what they used to be and regulators are working to ensure that they never will be again.  As such, are there any reasonable arguments for putting yourself forward for that perfect role you stumble upon in October?

One simple reason to search for a new role in the autumn is that many of the direct competitors for the role are of the opinion that walking away from a discretionary bonus in the eleventh hour is on a par with a chocolate teapot in the practicality stakes.  However, having fewer competitors for the role does mean that the odds are in favour of the job seeker rather than the employer.

Adaptive performance formation is a term psychologists use to describe what happens when your priorities shift as contexts evolve. Once you have received your ‘reward’, as described in the Skinner Experiment, you are more inclined to look favourably on a given situation.  In plain English, once you have been given a bonus, any issues you may have had with your role seem less of a problem than they were before.  If this rings bells, perhaps it is time to think about changing roles based on the calendar related decisions rather than how your performance is rewarded.  Sam Polk, a former Wall Street Hedge Funder, walked away from  his lucrative career after realising he was addicted to making money. While the example his experience provides is admittedly an extreme one, his description of feeling trapped and miserable provides an excellent foil for anyone who is holding back from actively searching for another role because of things like salary and benefits packages.

Golden Hellos from a new employer

Perhaps the most important factor to consider is the Golden Hello. Professions including teaching, medicine and the TA, all subscribe to it as does the Financial Services Industry.  News like UBS’s golden hello to Andrea Orcel can make the practice seem like the exclusive reserve of C Suite Executives, however, sign on bonuses are also offered at senior manager level.  Hiring managers and HR are all well aware that any new staff taking up a post in the autumn will miss out on a bonus from their previous employer.  Most of them are expecting to compensate them for their loss.  Applying for a new role in October does not mean abandoning all hope of receiving a bonus for that year.  Rather, candidates should be prepared to discuss all aspects of their salary and benefits package, including work/life balance benefits, with their prospective employer.